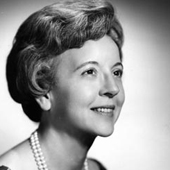 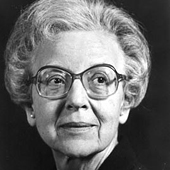 Catharine Crozier was born in Hobart, Oklahoma on Jan. 18, 1914. As a child she studied violin, piano, and organ, making her first public appearance on the piano at age six. She earned a BM from Eastman School of Music, where she studied with Harold Gleason, whom she later married. In 1939 she joined the organ faculty and in 1953 was named chair of the department. Two years later she joined the faculty of Rollins College in Winter Park, Florida, where she remained through 1969, serving also as organist of the Knowles Memorial Chapel.

Her concert career commenced in 1942, following her debut at the Washington D.C. National Cathedral. Thereafter she concertized throughout North America and Europe. According to her management company, Karen McFarlane Artists, Inc., Ms. Crozier was one of the three organists asked to play the inaugural organ recital at Avery Fisher Hall at Lincoln Center in 1962, and was engaged for a solo recital there in 1964. In 1976 she inaugurated the Kuhn organ in Alice Tully Hall.

The New York City chapter of The American Guild of Organists named her International Performer of the Year in 1979; she held honorary doctorate degrees from Smith College, Baldwin-Wallace College, the University of Southern Colorado, and Illinois College. The Eastman School awarded her an honorary Doctor of Musical Arts in 2000.

In addition to teaching and performing, Ms. Crozier co-edited several editions of the Method of Organ Playing, written by her husband, first published in 1937 and subsequently bestowed “essential tool” status for students of the instrument. Following the death her husband, Ms. Crozier edited the seventh and the eighth editions, in 1987 and 1995.

In 1993 Ms. Crozier moved to Portland, Oregon, where she was Artist-in-Residence at Trinity Cathedral until early 2003. As Artist-in-Residence, she frequently played organ voluntaries at services, gave solo recitals and continued to teach. Her recent performances were broadcast over Oregon Public Radio and in 2001 she was a featured artist on Oregon Public Television’s Oregon Art Beat. Known for her definitive playing of organ works of Ned Rorem and Leo Sowerby, two of the five Delos International CDs she made during the last twenty years of her life included the major organ works of these two composers.

On Dr. Crozier’s 75th and 80th birthdays, she performed solo recitals from memory at The Crystal Cathedral in Garden Grove, CA; her 85th birthday recital was played at The First Congregational Church of Los Angeles. Recently, the American Guild of Organists began to compile a video archive series of great organists; Catharine Crozier was the subject of The Master Series, Vol. I, which shows her performing and teaching in her 86th year.

On Friday, September 19, 2003 at the age of 89, Catharine Crozier died of complications from pneumonia following a severe stroke.
File not found.