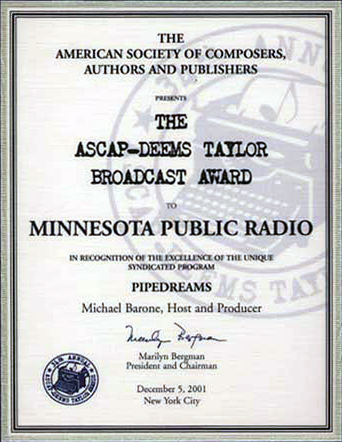 American Society of Composers, Authors, and Publishers (ASCAP) selected Pipedreams to receive its 2001 Deems Taylor Broadcast Award. This award is given “to American Public Media for the excellence of the unique syndicated program Pipedreams…Michael Barone, Host and Producer…and for two decades of ongoing broadcast and promotion of music by American composers.”

The ASCAP-Deems Taylor Awards are presented annually to American authors and journalists whose books and articles on the subject of music are selected for their excellence. In recent years, the Awards were expanded to also cite distinguished radio and television programs and Web sites on music.

The Awards were established in 1967 to honor the memory of composer, critic, and commentator Deems Taylor, who died in 1966 after a distinguished career that included six years as President of ASCAP.

Pipedreams was chosen in the radio broadcast category and was honored at a special reception Dec. 5, 2001, at the Walter Reade Theatre in Manhattan.